I had a Greek dinner on the weekend with a lawyer of a cryptocurrency firm who told me in all seriousness he did not ever intend to sell his BTC, but rather he intended to lend it out and live off the interest once it was over a million dollars, causing me to choke on my tzatziki. Whilst I believe that cryptocurrencies will remain far too volatile and risky to build one’s financial life around for the next few years, the implications of this nascent attitude do have significant implications for the broader economy and financial markets. Perhaps it might be a little easier to digest this intellectual frontier one soupçon at a time in our monthly newsletter.

Gold has been at the centre of the financial universe for centuries if not millennia and still holds a special place in our understanding of Monetary History. However, SCF owns almost none. Traditionally, the mystery of the gold markets, recently including the Fed’s implicit refusal to return Germany’s Gold and the legends surrounding Putin and the CCP stockpiling the metal have been intriguing beyond words. Yet despite the socio-political chaos and money printing of the last 12 months Gold’s price is unchanged in USD and down when valued in Euros. Assuming approximately 5 billion troy ounces – gold’s market cap has lost almost $2 Trillion in the last 6 months and Bitcoin’s has increased by approximately $0.8 Trillion. Clearly, there are extenuating factors in both moves, yet it seems fair to say that ‘physical’ gold is being eaten by its ‘digital’ nephew. The fact that we know the exact amount of BTC in circulation, exact future production, all previous transactions, its purity, its superior transaction speed and the fact that it does not go ‘beep’ at airport X Ray machines all suggest that young(ish) people will favour Bitcoin over Gold. Nevertheless, when measured in fiat currency, we still expect gold to increase in value over the next few years.The XAU vs BTC ‘store of value’ debate is interesting. Next month we shall consider the possibly more important topic of BTC’s ‘interest rate.’

BTC is not the only exciting cryptocurrency. Analyzing the Bitcoin Dominance Index (BDI) which reflects the percentage of total market capitalization of cryptocurrencies held by Bitcoin is insightful. For the last two years the BDI has been range bound between 58% and 73%. As I write, BDI appears to be sitting on the ledge at 58%. This has been due to the growth of alternative crypto currencies rather than any drop in the value of BTC/USD. 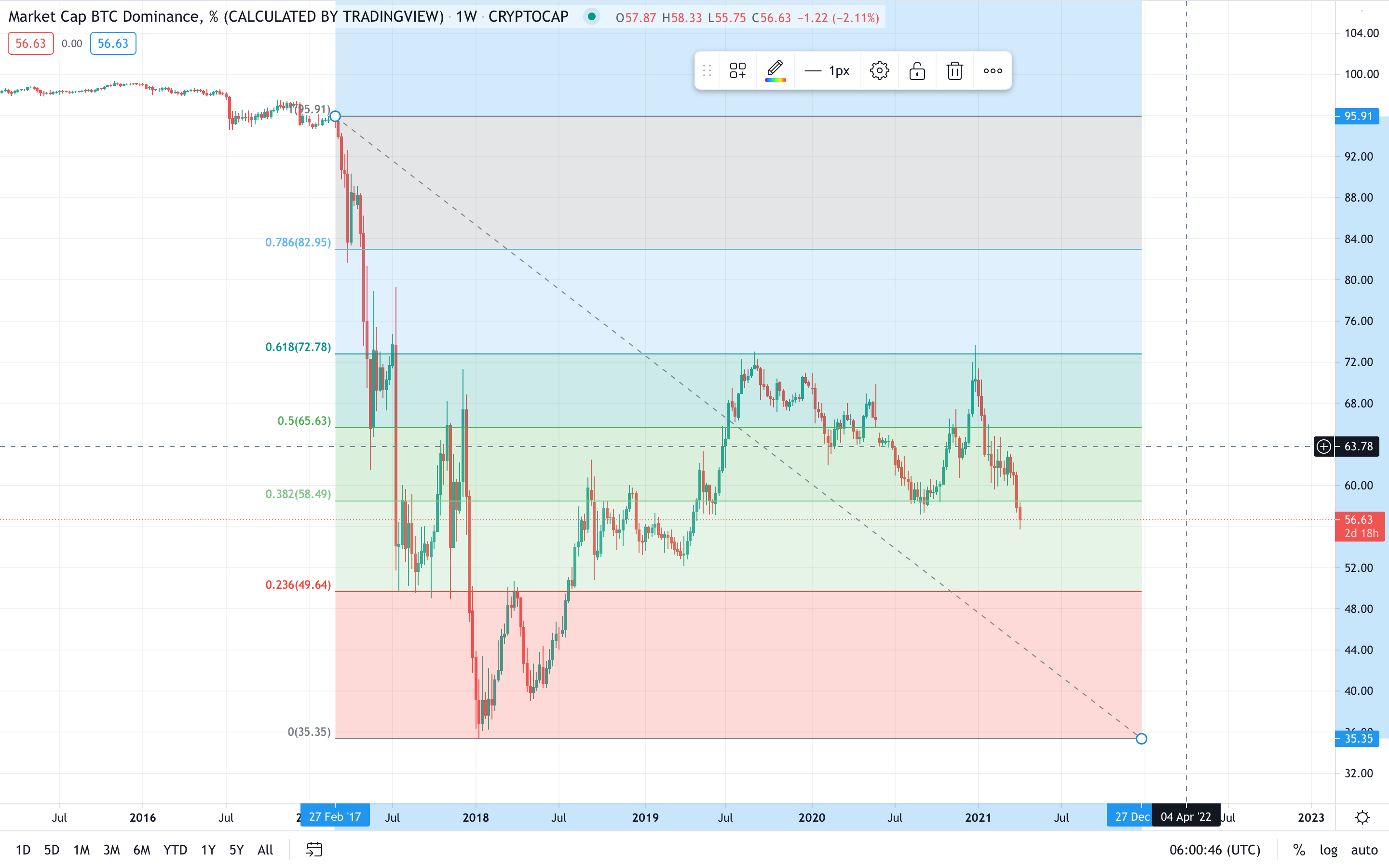 It is hard to know which ‘alt coins’ will be the beneficiaries of this dynamic as well as the magnitude and longevity of the move. The 10 year BDI chart appears to fit Fibonacci retracement levels remarkably well and suggests a drop to 49% by the summer. However, it is entirely possible for the BDI to continue to drop whilst BTC continues to appreciate in the coming months should the alt coin boom continue to accelerate.

On the subject of alt coins, the court case between Ripple Labs and the SEC as to whether XRP is a security that began in March and is of great significance to the crypto industry at large. Judge Sarah Netburn recently echoed the independent verdicts of the DOJ and Fincen, commenting; “My understanding about XRP is that not only does it have a currency value but that it has a utility, and that utility distinguishes it from Bitcoin and Ether.” Furthermore, the SEC stated that only Ripple Labs Senior management is liable for selling XRP which exonerates exchanges, institutions and private citizens from trading the currency. Therefore, SCF has begun to trade XRP again at Kraken. We remain bullish about Ripple’s use case and ironically, it’s uniquely transparent architecture and Ripple Labs’ commitment to compliance makes it an attractive… ‘investment.’

Connect on Linkedin
Subscribe to
Our Newsletter
Checkout my Book below

You understand that you are solely responsible for reviewing any fund, its offering and any statements made by a fund or its manager and for performing such due diligence as you may deem appropriate, including consulting your own legal and tax advisers, and that any information provided by Straits Currency Fund shall not form the primary basis of your investment decision.

This material is for your general information only and is not an offer or solicitation to buy or sell any security including any product in a hedge fund. Hedge funds have eligibility requirements for participation, generally beginning at a net worth greater than SGD 2 million or $10 million for companies.

Past Performance is No Guarantee of Future Results.